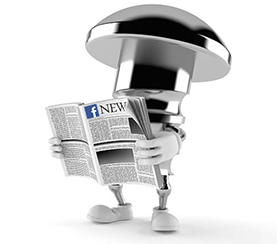 Facebook has long used variables like how often you interact with your friends and how many mutual friends you have to predict if you want to hear from them. The latest survey results have provided further insights.

Patterns that emerged from the results included being tagged in the same photos, as well as reacting and commenting on the same posts.

This latest ranking update means posts from these best friends will appear higher up in your News Feed. The friends you want to hear from change over time, so the prediction models are continuously updated overtime, as your interactions with your Facebook friends change.

Along similar lines, Facebook also surveyed people about what type of posts they were most interested in. Based on these results, they are updating News Feed to prioritise links you are more likely to want to see.

Facebook used the survey responses to identify signs that you might be interested in posts, then combined this information with other information about the post, like the type of post, who it’s from and the engagement it’s received, to more accurately predict if it is the type of thing you are looking for.

Over the next few months, Facebook is introducing a series of ranking updates aimed at prioritising original videos that people want to see.

The changes, which will affect video distribution across Facebook including;

The update will focus on three key principles;

Overall, the main take-away from all of this is that these changes will benefit video distribution for Pages that create original content that people want to watch.

New Tool to Control What You See On Facebook

Facebook is introducing “Why am I seeing this post?”, a tool intended to help you better understand and more easily control what you see from friends, Pages and Groups in your News Feed.

The changes mean you’ll be able to tap on posts and ads in News Feed, get context on why they’re appearing, and take action to further personalise what you see. In other words, for the first time, Facebook has built information on how ranking works directly into the app.

You can locate “Why am I seeing this post?” in the drop-down menu in the right-hand corner of posts. From here, you can easily find out how your past interactions impact the ranking of posts in your News Feed. You can see:

In addition, Facebook is making improvements to “Why am I seeing this ad?” a tool they launched back in 2014. This will now include additional details about the ads you see when information on an advertiser’s list matches your Facebook profile.

It will also provide details like when the advertiser uploaded the information or if the advertiser worked with another marketing partner to run the ad.

Facebook has introduced a new background location control on Facebook for Android, which allows you to choose whether or not you allow the platform to collect your location information when you’re not using it.

Up until now, when using these features, you were asked to enable Location History. If you did, you would share your location with Facebook, even when you weren’t using it. In other words, the platform stored a history of your past locations.

The change means there is now a dedicated way to decide for yourself whether or not you want to share your location when you aren’t using the app.

All users with Android devices who chose to turn on Location History in the past will be alerted by Facebook and told about the new control. If you’ve never turned on Location History, you don’t have to do anything. Facebook won’t turn either of these settings on unless you specifically tell them to.

For those who use Facebook for iOS, nothing is changing. But the platform will send a similar alert to everyone who chose to turn on Location History in the past so they can check to make sure their settings are right for them.

How to create a B2B Brand Strategy

One of a company’s greatest assets is its brand. A brand gives a business its identity and helps shape customers’ perceptions and connections to that company’s products or services.

We’re all ears, and we’re here to help you grow your business.